This is  the summary of Nathanville’s Model Railroad Village and for further inspiration in the event you wish to design and build your own railroad model, Excellent infos and very impressive photos. 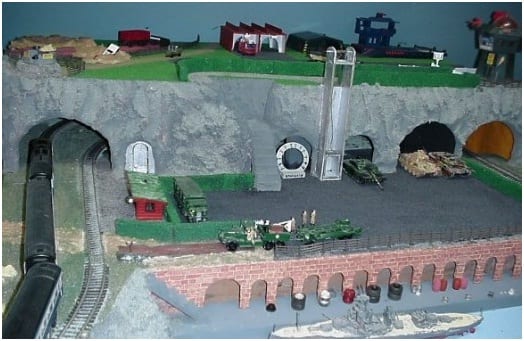 The railway bridge over the dock was made using 3 mm plywood. Arches were cut into the plywood, and before fixing into place the surface was coated with brick effect wallpaper used for scale model buildings.

Most modellers when they want to add height and dimension to a model railway village use crossover and gradients – and very commendable. I was not so ambitious as to try gradients and crossovers. Instead, I built an underground. The main Nathanville model train system can support up to five trains (four in operation at any time). As a train on the outer circuit enters the hill under the military airfield that train can be stopped, points changed, and the train on the other sub-loop started. Thus, one train enters the hillside and a moment later another train emerges from the hillside. The points that control this operation are wired to a central control making the operation seamless. The system on the underground (subway) operates in a similar way – two main tracks, but with one sub-loop

A short video made years ago of Nathanville model railway village set up in the loft.