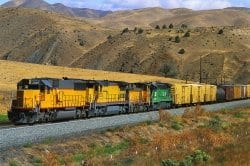 Welcome to Model Train Books – Before I start discussing my story please take the time to visit some other great resources, I have to offer including:

I got my first Märklin starter set for Christmas 1 month after I turned 3, in 1967. I still have that train. I played a bit with my set when I was little – built my first layout “real” layout when I was about 17 – built it in my parents’ living room on a 4’x8′ table, with elevations to 3 levels. Started intricate wiring, and got frustrated because I could not figure out how to use the on/off switches I had on my wooden control panel for the AC turnouts that required only “instant touch” switches in conjunction with LED lights that, in order to stay on, indicating what direction the turnout was switched to, required the on/off toggles, so I never completed the layout, and tore it down after about 6 months of building.

After that, I didn’t do anything for years. That was in Denmark. I brought my collection with me to the US when I moved here in ’89, and didn’t do anything but lug it around from one home to the next in boxes – then in 2001 I began expanding my collection with some of the expensive Danish rolling stock from Märklin, Lima, and Roco (DSB = Danske Stats Baner) – $150 – $300 for a lok., $20 – $60 for passenger coaches, etc… I wanted to upgrade to the K-track, but my business went under and I ran out of money – but I learned about the new Märklin Digital, which solved the issues I had had in my teen years, and now want to expand my fleet of DSB rolling stock – modeling 1960’s through 1990’s (the era in which I used the trains, and remember the real stuff), add the Digital, and run all my engines with LokSound dekoders. I want to run the Faller-car-system too…

I always had the dream of this huge layout in the basement, with helixes that ran a main line up and throughout the entire house, with small tunnel-holes through the walls from room to room, and a dual main line outside in a purpose-dug, properly drained, and transparent-acrylic covered trench, with a 3rd single “local” side line, from the house to a pole-barn in the back yard, and have the entire layout computer-controlled so that it would operate 24/7, whether I was actively engaged in “playing” with it or not, so that I could be entertaining on my back deck, and suddenly we’d see a train running through the back yard under the see-through acrylic (which is at lawn-level) from the house to the barn – with signaling on the main line, etc… – and then have another huge section of layout in the pole barn, so that I could build alot of realism into scale of operation – distance of travel, and timing of trains running, etc.

Then someone beat me to it in Germany – when in 2000 the idea for Miniatur-Wunderland was born. That doesn’t mean I don’t still want MY own huge layout. I still imagine when I build my next house, that I will have a 2-story basement (a “normal” basement, and a “sub-basement” for my train room) so that I can have a huge amount of track running throughout, and design into the house all the places where track would run throughout the house, through walls, etc., as I build it.

It’s fun to dream… Some day, perhaps, I’ll be able to have a permanent layout. So far I have not been stationary in one home for long enough that this dream could be feasible. I just don’t want to have all this time and energy into building my dream layout, only to have to tear it down because I am moving to a new house, or a new location.

Frustrating that all the Märklin “stuff” is so expensive, but I am a believer in AC and 3rd rail systems – easier to keep the rolling stock running, because of a much higher tolerance for “dirty track” – although there is a slight compromise to the realism of the track itself due to that 3rd rail – and the quality of the rolling stock – the locomotives in particular – being die-cast… Also, I have looked at the Danish model builder “Helan” and their attention to detail in their scale models of the DSB rolling stock – NICE stuff, but OMG, it’s expensive!

R/C cars, trucks, boats, and planes is my other sinful pleasure – and the boys are ALREADY into that. Is model railroading the greatest hobby in the world? I would expand that to say that “model miniature vehicle building and operating of any kind” is the greatest hobby in the world. Building a miniature of reality that we can control – make the corrections that we see fit to the mistakes others have made, over which we have no control – that is what I think appeals to many people. That, and the tranquility of creating something with our hands and minds.

There is so many different aspects of model railroad building from landscape shells to water scenes and even non-toxic safe materials to use, it is vitally important to find resources that can help you move in the right direction to achieve the ultimate model railroad scene.

I hope this website gives you a stable base to grow upon and learn a variety of techniques to build the model railroad you desire.

Please feel free to contact me with any questions or comments.