Hi Friends, here is one more wonderful O Scale model train layout. This image gallery is contributed by one of our amazing facebook fan. Please have a look of his words in the end of the image gallery. 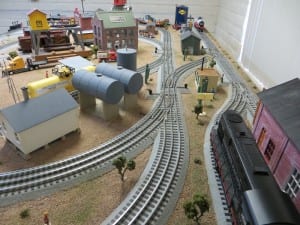 I am taking you up on your request for layout pics although this is a toy train layout and may not meet the level of skill seen in many of the model railroad layouts on your site. If you do not feel the layout meets
your standards I will not be offended if it is not published.

Some basic facts: This is a switching layout on a 5’ by 8’ plywood table. It is O gauge using Lionel Fast Track laid over indoor outdoor carpet that is covered with sifted sand from my front yard. Lichen, commercial trees, ground foam, and home carved cactus complete the scenery. Two baby Trainmasters and two small steam locomotives are used for the switching operations.

Road names on the locos and rolling stock are primarily western and southwestern. Industries are named after family and friends.

I have developed a spotting plan using numbered poker chips that lets me switch cars from industry to industry, set up a train using cars at the different industries, or spot cars onto the various industries from a waiting train.

I also have additional locomotives, an Arizona and California freight train, two passenger sets, handcars, and novelty cars that I will just run on the layout for fun. All of the locomotives are operated by
command control.

The table is one of 6 that formed a U shaped layout that previously occupied this 16 by 13 ft. room. I decided to downsize and left one section to use with a more manageable layout. I used more modern track
and switches to improve operation and control over the layout. The previous layout was noticeably lacking in this regard since it was built with Lionel postwar tubular track and switches.