This layout is a simple oval track plan set in a Christmas winter wonderland. The entire surface of the layout is covered in snow. The model train runs around a frozen lake and a merry-go-round.

The surface of the layout was made from an insulation board with an orange peel coating for the texture of snow. There are cars and Christmas trees scattered about as well as cartoon characters who you may recognize. All these make for a festive atmosphere with a Christmas theme.

A Model Railroad During Christmas This model railroad is set in a Christmas winter wonderland. There are snowmen, snow-dusted trees, a carousel, and other Christmas-themed elements. The tracks run in a circle, and in the middle of it are various characters.

Scenery at the Center of the Railroad Track Here is a closer look of the scene at the center of the track. There is a pond with characters enjoying its frozen surface. From here, we can see the details of the trees and how they are dusted with fine snow.

Model Train on the Christmas-Themed Railroad 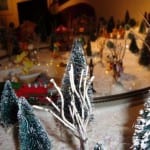 The red model train comes around the curve of the track. Up close is a leafless tree whose crooked branches reach out to the sky. From here, we can also see the texture of the snow. Pictured here is the Christmas-themed railroad during its earliest stages. This hill with the tunnel was made with an insulation board, cut with an X-acto knife, and attached together using adhesive. Here is the model train exiting the hill’s tunnel. You’ll notice that the rail is elevated slightly. That is the sponge-type weather stripping to keep the noise of the track to a minimum.

The Tunnel Entrance from a Different Angle From this angle, we can get a glimpse of the tunnel’s interior. We can see the layers of the hill as well before it gets sprayed with white primer for the snow.

Crater for the Frozen Lake on the Model Railroad

A crater has been made in the middle of the layout for the frozen lake. To get the realistic look of its surface, the foil side of the insulation board was used and was attached underneath the layout.

Parts of the Christmas-Themed Railroad The parts of the model railroad have been added in this photo. As you can see, the lake is convincing as it reflects the yellow light on the left. Christmas trees are placed everywhere as well as buildings and a carousel. On ground level, we can see its parts up close. There’s a red car carrying a newly cut Christmas three, while a cartoon character ice skates on the frozen lake. The train comes around the curve, about to enter the tunnel.

View of the Railroad from a Different Angle on Ground Level The model railroad is now populated with trees, buildings, and cartoon characters having a great time in the snow. All the elements add to the jolly atmosphere that Christmas always brings.